National Republican Trust PAC is now widely known to use the most savvy political tactics and achieve results, launching some of the most memorable political advertising campaigns.

Recognized in the media as the "powerful National Republican Trust", we have held corrupt liberal politicians accountable for their treachery.

We say the things the Republican Establishment can't say, won't say, or is afraid to say.

Since 2008, the National Republican Trust has been iconoclastic in taking on the corrupt political class, the Washington establishment, and the so-called "mainstream media".

GOP Trust is run by an eclectic team with backgrounds in journalism, military intelligence, and fourth generation warfare, enabling us to maneuver smartly in the complex and corrupt world of politics.

​We are committed to continuing the legacy of Ronald Reagan. As such, GOP Trust promotes a political vision that includes several core ideas:

Supporters of GOP TRUST come from all walks of life. They share one common belief -- that America has been a great nation because of her people and their enduring values. 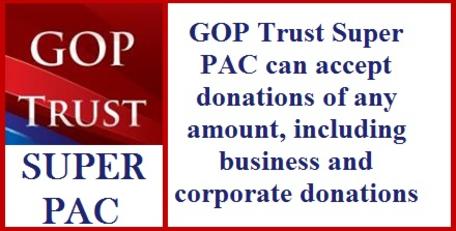 You can add HTML directly into this element to render on the page.

Just edit this element to add your own HTML.

Paid for by The National Republican Trust PAC. Not authorized by any candidate or candidate's committee.

Contributions to The National Republican Trust PAC are not deductible as charitable contributions for federal income tax purposes.
Corporate funds must be donated to the GOP Trust Super PAC.